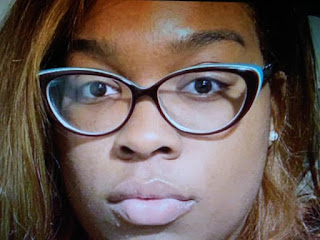 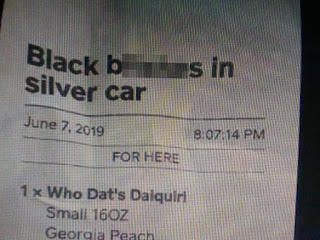 I don't believe the claims of this story for a minute.

These type of racial slander stories have been circulating in the media ever since Donald Trump got elected with one purpose.  The agenda is to show how America has become more racist since Trump became president.  It's a bold face lie because this is the same country who elected Barack Obama twice, unfortunately.  And as often is the case, many of these stories turn out to be hoaxes.  For example, ,does this receipt look like somebody wrote "black bitches in silver car"?   Those words are printed.  The woman making the false claim could have been carrying around that receipt in her pocket to use at the appropriate time to get her face in the papers.


Daily Mail reports an employee at a Mississippi restaurant was fired after writing a racist slur on an African-American woman's receipt.
Alexia Washington and a friend visited Who Dat’s in Oxford on Friday and placed a meal order.

But they were horrified when they received a receipt from a male worker at the drive-thru and saw a line reading: 'Black b*****s in silver car.'

Washington said she immediately reported the inappropriate remark to the manager of Who Dat's, who made the employee apologize.

However she was still disturbed by the restaurant worker’s vile message and  posted an image of it on Facebook.