I'm more radical than you: Bernie Sanders faces a new kind of threat in Elizabeth Warren 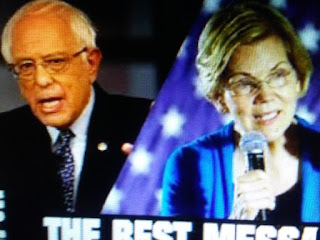 Either one of these clowns would bring the United States to ruin because their policies don't work.
Look at what happened to Venezuela for the latest proof of that.

Stamford Advocate  reports the Bernie Sanders campaign, facing a new challenge in the rise of Elizabeth Warren, has settled for now on a careful if sometimes awkward strategy: emphasizing Sanders's unique position in the liberal movement, while avoiding direct attacks on Warren and rolling out plans that overlap with her attention-grabbing ideas.

That approach was on display Monday as Sanders introduced a proposal to cancel all student debt across the country. His plan came less than two weeks after Warren announced her own idea for scrapping student debt, one that would cover fewer people than Sanders's would. "Under the proposal we introduced today, all student debt would be canceled in six months," Sanders said.