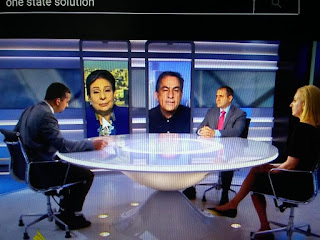 I don't know exactly how this would work.  But, anything that lets Israel peacefully co-exist with Palestinians to resolve this dispute is worth a try.
However, there a forces  that financially benefit from the status quo that will be the biggest hurdle to get over.

Wall Street Journal reports Trump peace team sees an opening to offer a fresh alternative as people on both sides increasingly give up on the traditional two-state solution.
When the Trump administration reveals its economic plan for the West Bank and Gaza this month, it hopes to appeal to Palestinians like Amr Marouf, who manages a seafood restaurant here.
Saying his people’s “future is dark,” Mr. Marouf, 27 years old, has all but given up on a Palestinian state alongside Israel, an idea that has for decades animated international efforts to resolve the Israeli-Palestinian conflict.
“Maybe the good solution for us, for both Israelis and Palestinian people, is one state,” Mr. Marouf said.
U.S. officials want to tap into Palestinian’s frustration with the two-state paradigm and offer a fresh blueprint they say will improve their lives, if not fulfill all their long-sought national aspirations. Support for a Palestinian state, at about 60% of the population a decade ago, fell to 43% among Palestinians in 2018 and 49% among Israelis, according to a joint Israeli-Palestinian poll.