Set up for Fake Indian: Pocahontas Warren Gets Center Stage 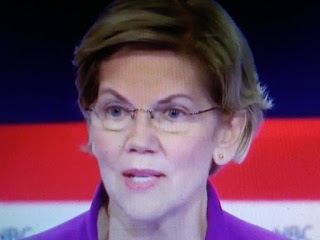 There was no reason Elizabeth Warren was at the kids table with the other minor Democrat contenders for the Dem nomination for president.
She has triple support in the polls compared to the other nine who where there.  They wanted her to stand out easily.


Bloomberg reports Elizabeth Warren will be the only one of the top polling Democratic candidates on the debate stage Wednesday night, giving her a chance to showcase her mastery of policy details without her main competitors available for rebuttal.

The liberal firebrand from Massachusetts has steadily risen in polls over the last two months and is drawing crowds on the campaign trail by using an expansive portfolio of proposals on a series of issues to brand herself as a candidate with a plan.