The Chic in the Red: First poll has Tulsi Gabbard as the shock winner of the first Democratic debate 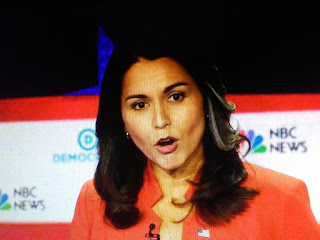 I don't know if this nobody got legs.  But, this is how it starts for Democrats.
They love to come up with an unknown and lie about that they're a new face with the same wackiness as all the others.


Daily Mail reports Tulsi Gabbard is the winner of the first Democratic debate in Miami on Wednesday, according to a Drudge Report poll.

The popular news aggregation internet site took a poll of users which asked who won the 10-candidate debate.
Surprisingly, nearly 40 per cent of those who took the survey chose the 38-year-old congresswoman from Hawaii as the runaway winner.

Senator Elizabeth Warren of Massachusetts came in second with 12.26 per cent of the vote.