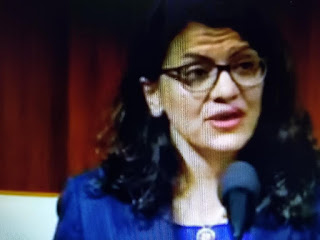 Rashida Tlaib makes up the Ugly Ducking half of The Squad along with Ayanna Pressley.
But, the statements out her mouth are as hideous as her looks.

In response to Trump rolling out his travel ban idea in December 2015, a version of which he would later successfully implement as president despite legal challenges, Tlaib said on Twitter: “Deport this asshole!”