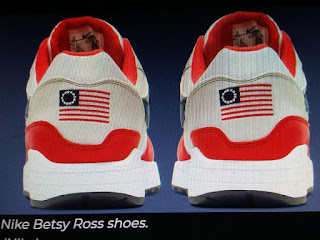 Nike is such gutless corporation.  I stopped buying Nike when they signed  Kaepernick..
The sneakers in questioned intrigued me.  No more!


Washington Examiner reports Arizona Gov. Doug Ducey announced his state will no longer offer tax incentives for Nike to move to the state after it was revealed they pulled a new shoe design that featured the Betsy Ross American flag.

The decision was made after former NFL quarterback Colin Kaepernick told the company he and others considered the flag to be offensive since it represents a time when slavery existed in the United States.