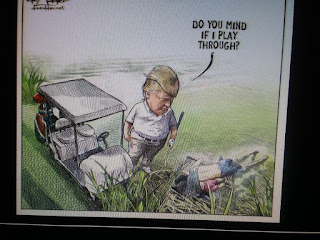 I thought the firing was problematic.
That was before I found out it was a Canadian cartoonists.  They don't have the same free speech rights in Canada.


NY Post reports a Canadian cartoonist lost his freelance contract with a newspaper after tweeting an illustration that depicted Donald Trump golfing over the bodies of two drowned migrants.

Political cartoonist Michael de Adder claimed that he lost the contract due to the Trump image — but the company disputes his assertion.

“This is a false narrative which has emerged carelessly and recklessly on social media,” Brunswick News Inc. said in a statement on Sunday.