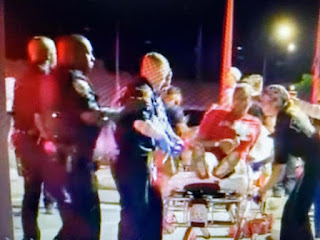 Fact- There are more guns on the streets of New York because Mayor Bill de Blasio has eliminated "stop and frisk" from NYPD police procedures,.
As a result thugs aren't afraid to carrying their guns knowing they don't have to fear being stopped by the cops.  More guns, more shootings, more injuries, more people get killed, and Bill de Blasio created the situation with his policies.

NY Post reports the fatal shooting at a Brooklyn block party overnight — just steps away from where cops were doused with water last weekend — is proof the city is “slowly crumbling,” the Sergeants Benevolent Association said Sunday.

In a scathing email sent out to union members, SBA President Ed Mullins blamed Police Commissioner James O’Neill for the state of the city and called his removal.

“None of it is funny, 12 people were shot, someone is dead, and cops were hit with water. NYC is slowly crumbling. Don’t say you weren’t warned. Restore the NYPD – REMOVE O’NEILL!” Mullins wrote.