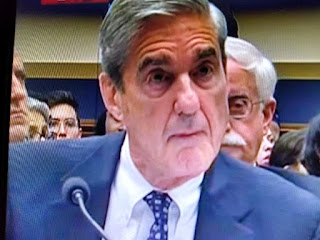 What a big waste of time.  But, we learned something we didn't know before.
Mueller was just a figurehead.  He never was in control of the probe into Russian collusion.  I think the Democrats knew it all along.

At other points, Mueller got confused about whether the members of Congress were asking him questions or if they were reading from his own report.

In just the first 90 minutes of the hearing, Mueller needed help understanding questions more than 10 times.

In one such exchange, Mueller — under questioning from Rep. James Sensenbrenner (R-Wisc.) — asked: “And where are you reading from on that?”

“I’m reading from my own question” the lawmaker reminded him.

“Then can you repeat it?” Mueller asked, eliciting laughter from the audience.

In another painful episode, Mueller had to ask Rep. Sheila Jackson Lee three times to clarify and restate her question.