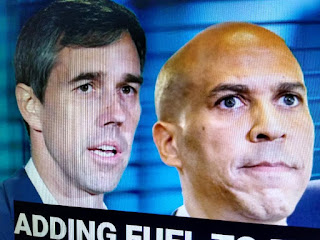 Both Booker and O'Rourke are 2% in the RCP polls.
So, Democrats really don't care what they have to say.  That's why they're desperate to make any headlines.


Fox News reports two Democratic presidential primary candidates criticized President Trump on Sunday for retweeting a conspiracy theory that the Clintons had a role in the death of disgraced financier Jeffrey Epstein.

Both Sen. Cory Booker of New Jersey and former Texas Rep. Beto O’Rourke said that Trump is trying to divide Americans and distract voters away from the issue of gun violence by fueling the conspiracy theory that Epstein did not commit suicide, but instead was killed by someone connected to former President Bill Clinton and former Secretary of State Hillary Clinton.

“What he’s doing is dangerous, he’s giving light to conspiracy theorists and whipping people up to anger against different people in this country,” Booker said during an interview on CNN’s “State of the Union.” “He is using the same tactics as the Russians to attack our democracy.”

I would wager that an overwhelming majority of Americans who are paying attention doubt that Jeffrey Epstein committed suicide.  It's a no-brainer.
at 8/11/2019 01:43:00 PM