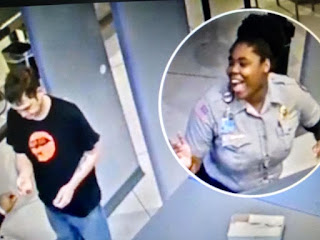 Of course our corrupt media didn't write the kind of headline I wrote because it doesn't fit their template of African Americans being the victim.
But, if the racial component of this story were reversed, you know how the spin would be.  This media report doesn't even indentify the security guard by name.  Her name should be out there too.  This is journalistic malpractice and it's done on purpose to protect a person of color.

A traveler passing through security at Rochester International Airport got an unexpected sick burn from an employee — when she handed him a folded-up note that said, “You ugly!!!”

Neal Strassner, 40, said he was handed the small, folded-up piece of brown paper by a female worker before collecting his things at the checkpoint in June.
He said he initially thought it was a piece of scrap cardboard or some trash.

“I didn’t open it because I didn’t care about it,” he told The Post. “She turned around a few times asking, ‘Are you going to open that?’”