Mets 1B Pete Alonso makes Baseball History: Most HRs by a rookie 53 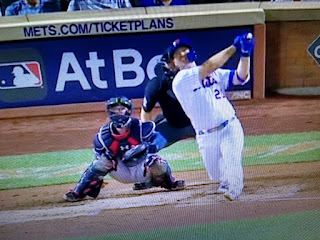 Fortunately I was at Citi Field to witness a rare feat.  In a season of ups and downs, Pete Alonso has emerged as the new cornerstone of the Mets franchise.
He's a breath of fresh air that plays with a passion and maturity beyond his years.  With him and he likes of Jacob deGrom, Jeff McNeal, Armed Rosario, and J.D. Davies the Mets have a foundation to build on and get to the promised land.

With one swing in the third inning of the Mets’ 3-0 win over the Braves on Saturday night, the slugger entered the record books as the all-time leader in homers for a rookie. Homer No. 53 moved Alonso ahead of Aaron Judge for the record.

Alonso threw his arms into the air as the ball disappeared behind the center-field fence and the theme from “The Natural” blared as he rounded the bases. The blast came on a 2-1 pitch from Braves right-hander Mike Foltynewicz in Alonso’s second at-bat of the night.

A night earlier Alonso homered to tie the record established by Judge in 2017.