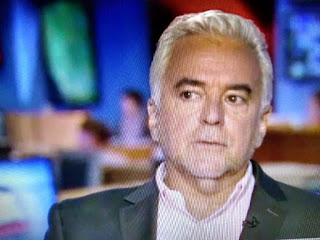 I think Debra Messing is trying to surpass Alyssa Milano as the dumbest actress in Hollywood.
She's having a banner week after retweeting blacks who support Trump has mental illness.  I didn't know John O'Hurley was a conservative.  But, I'm glad he's in the ranks.

Fox News reports “Seinfeld” actor John O’Hurley sounded off on Hollywood for suppressing “diversity of thought” in the wake of Debra Messing and Eric McCormack calling for supporters of President Trump to be outed.

Trump plans to attend a Sept. 17 fundraiser in Beverly Hills during a trip to California that will also include visits to the San Francisco Bay Area and San Diego, officials said. The “Will & Grace” co-stars took issue with a Trump fundraiser happening in their city and called for donors to be doxxed.

“Let me just say I’m embarrassed for both of them because I know them both, I’ve worked with Debra before. They’re both smart people... they do wonderful work,” he explained. “But, they’re pushing a case that falls apart from the sheer weight of its lunacy, as though the Hollywood community needs to be purged of this social and intellectual hygiene problem called conservative thinking. It underscores the fact that we aren’t receptive to a diversity of thought which is the exact opposite of what you feel the liberal way would be, and I find that obscene.”