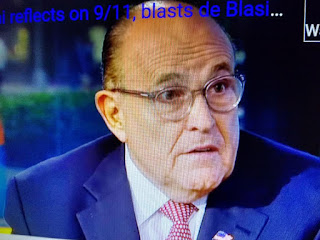 I've been posting about this for months.  Thank you Rudy Giuliani, the man who cleaned up New York after the horrors of David Dinkins.
Dinkins protégé, Bill de Blasio, has turned New York into the largest public toilet in the country.  The city is becoming dirtier, more rowdy, and less safe since de Blasio became mayor.  When quality of life suffers, everything else goes down with it.

NY Post reports former Mayor Rudy Giuliani on Friday said “it breaks my heart” to watch how the city’s quality of life has plummeted under current Mayor Bill de Blasio.

“Fox & Friends” host Ainsley Earhardt started the ball rolling, telling Giuliani, ”I’m a Christian. I love everyone, and I love him, but I don’t like what he’s doing for this city and that worries me. When I moved here everyone said you cleaned up Times Square. I don’t want it to go back to that. How do you feel about Mayor de Blasio and the direction of this great city?”