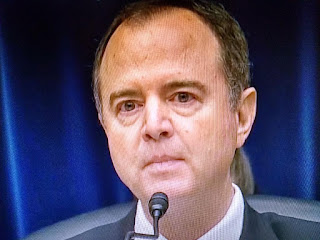 I don't see how Schiff can stay as committee chairman when he's also a fact witness to the case for having contact with the fake whistleblower.

The resolution to censure Schiff -- who has become a favorite target of Republicans for his role in the Trump impeachment inquiry -- was first introduced late last month by Rep. Andy Biggs, the Arizona Republican who chairs the conservative House Freedom Caucus, and has the support of House Minority Leader Kevin McCarthy, R-Calif., House Minority Whip Steve Scalise, R-La., and House Republican Conference Chair Liz Cheney, R-Wyo., among other ranking Republicans in the lower chamber of Congress