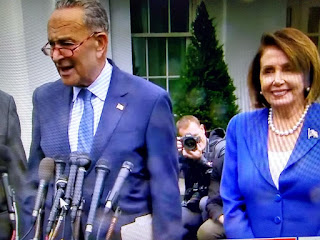 I don't believe for a second that Nancy Pelosi prays about anything with the radical views
supports that are immoral.  radical Democrats have no inkling what faith beliefs are all about.

Fox News reports Senate Minority Leader Chuck Schumer, House Speaker Nancy Pelosi and House Majority Leader Steny Hoyer announced at a news conference outside the White House on Wednesday that they had just walked out of a meeting with President Trump on Syria policy, after he apparently called Pelosi either a "third-rate politician" or "third-grade politician" and angrily suggested the Democrats probably appreciated communist Islamic State terrorists in the Middle East.

"What we witnessed on the part of the president was a meltdown, sad to say," Pelosi, D-Calif., remarked.

She said later, at the Capitol: "I pray for the president all the time, and I tell him that -- I pray for his safety and that of his family. Now, we have to pray for his health -- because this was a very serious meltdown on the part of the president."