Noose getting tighter: Biden snaps at reporter over son Hunter Ukraine question, tells media to focus on Trump instead 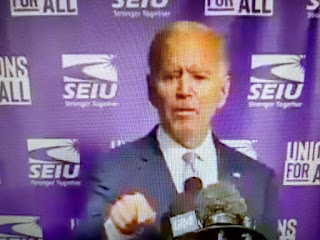 Hunter Biden got kicked out of the Navy for being a drug addict.
He has no experience in the oil and gas industry.  Yet he gets appointed to a board of a Ukrainian oil and gas company when his father is vice president of the United States and is in charge of Ukrainian policy?  A blind person can plainly see what the deal is.  Biden's lead in the polls has collapsed because they see Joe Biden is crooked.

Fox News reports former Vice President Joe Biden snapped at a reporter Friday after being asked whether his son Hunter Biden’s work in Ukraine -- while the elder Biden was diplomatically involved with the country as vice president -- represented a conflict of interest.

Joe Biden loses his cool when confronted by a reporter asking whether there was ‘conflict of interest’ regarding his son's Ukraine/China business scandal. pic.twitter.com/kW2U0IwztJ
— Giovanni Cavalcanti (@giovannicavett) October 4, 2019