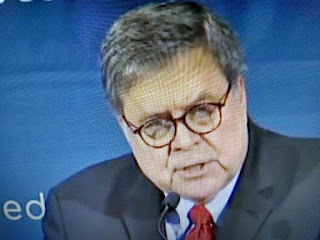 Barr completely nails it!
I would go even further by saying leftists are involved in a coup of Trump.

Fox News reports Attorney General Bill Barr accused congressional Democrats Friday of “using every tool” to “sabotage” the Trump administration by setting a “dangerous” precedent in implying that the government is illegitimate.

During a speech at the Federalist Society’s dinner in Washington, Barr took aim at the “resistance,” accusing liberal lawmakers of attacking the very foundations of the Constitution.

“I deeply admire the American presidency as a political and constitutional institution,” he began. “Unfortunately over the past several decades, we have seen a steady encroachment on executive authority by the other branches of the government.”