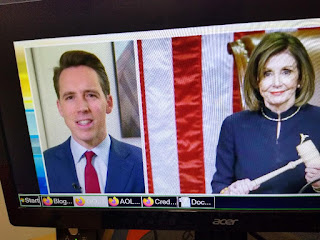 Nancy Pelosi has n end game because she's senile!  But, other than that.
She has no say in how the Senate runs their business.  The House already had their secret witnesses.  They blew it because none of their witnesses were fact witnesses.  It's all a crock and the whole world knows it.

Fox News reports Sen. Josh Hawley of Missouri joined with a host of fellow Republicans Monday to introduce a resolution allowing the chamber to dismiss articles of impeachment against President Trump for lack of prosecution, as House Speaker Nancy Pelosi delays sending the case for trial

The resolution specifically would update Senate rules to allow the chamber to bring a motion dismissing the articles.

“In the real world, when a prosecutor brings a case but refuses to try it, the court has the ability and the defendant has the right – the constitutional right, I might add -- to have those articles, those indictments, those charges dismissed," Hawley said in a speech on the Senate floor. "That is precisely the action that I am proposing today.