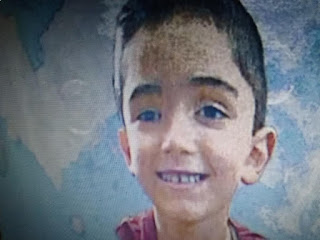 I cannot begin to understand how anybody can do that to their own Autistic son.
Police officer Michael Valva is an animal.  Not human, he's monster who needs to be put down for good.

NY Post reports heartbroken mourners gathered Thursday to say a final goodbye to the 8-year-old Long Island boy who police say was slain by his NYPD cop father and the officer’s fiancée.

Roughly 100 family members, friends and even strangers touched by the horrific tragedy showed up at St. Elizabeth Church in Melville for the funeral service of Thomas Valva.

Thomas, who had autism, died of hypothermia after authorities found him unresponsive at his Center Moriches home Jan. 17.

Police veteran Michael Valva, 40, the boy’s dad, and Valva’s fiancée, Angela Pollina, 42, were charged with second-degree murder in Thomas’ death after cops say the couple tortured the child, subjecting him to “freezing temperatures” in their unheated garage overnight when temperatures outside