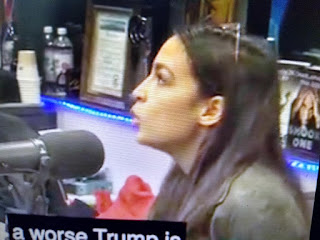 Thank God for the likes of Alexandria Ocasio-Cortez, the gift that keeps on giving.
She is the best thing that could happen to this country for the cause of freedom.  Democrats used to hide their leftism.  AOC doesn't hide anything and tells you up front she's a fascist.


Daily Mail reports freshman congresswoman Alexandria Ocasio-Cortez has claimed that electing former New York City Mayor Michael Bloomberg is ‘not a good idea’ and will only lead to a president who is a ‘worse Trump’.

The New York congresswoman told The Breakfast Club on Power 105.1 AM on Tuesday that the country can't ‘go back to the same policies that we had before’ by electing Bloomberg, claiming that it will pave the way for a ‘more sophisticated’ Trump.

She also called out those candidates who rely on big donors, stating that they are listening to people ‘who are not like most working families’ in return for campaign funding.