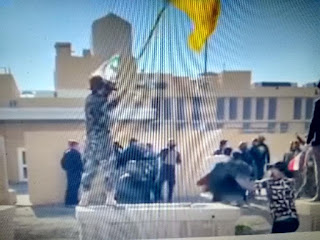 This may be worth watching.

One America News reports  revealed small rockets hit near the U.S. Embassy in Baghdad early Sunday. U.S. military and Iraqi officials confirmed the incident happened around 3:30 a.m. local time, but added no casualties have been reported.

Iraqi officials said two small rockets struck within the U.S. Embassy compound, while a separate rocket exploded outside a coalition military base.