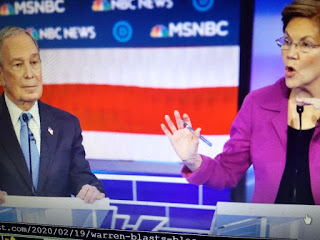 This was the point of the debate where Bloomberg got totally destroyed.
He didn't have a good answer to deal with his mistreatment of women.

NY Post reports for a second time at the Democratic debate in Nevada on Wednesday night, Sen. Elizabeth Warren chided former New York City Mayor Mike Bloomberg for his record with women, specifically bringing up a number of his former employees who have signed nondisclosure agreements.

Warren launched the attack after Bloomberg noted he has hired many women in top positions at his charity, his company and during his time as mayor.

“We are not going to beat Donald Trump with a man who has who knows how many nondisclosure agreements,” Warren said.