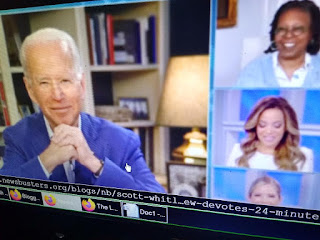 Besides the fact Joe Biden doesn’t know what day it is.
His biggest problem is that he's not a leader.  All he does is lobby for money and he does what he's told by his donors.  That's  all he is.

NewsBusters reports it’s good to be a Democrat running for president on ABC's The View. The combative, liberal women are prone to interrupt and attack if a Republican presidential candidate comes on. But Joe Biden appeared on Tuesday for a friendly, gushing interview that lasted 24 minutes and 41 seconds. He faced almost no tough questions and talked for minutes on end without an interruption.

Co-host Sunny Hostin actually thanked the presumptive Democratic nominee at one point, encouraging him to hammer Republican Donald Trump for his handling of the coronavirus. Biden then talked, uninterrupted, for two and half minutes: