'It's NOT racist!' Donald Trump lashes out as he is challenged on using 'Chinese virus,' 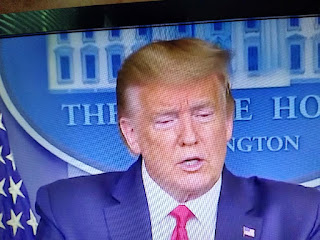 Funny how we're in the middle of a so-called health crisis.
But, that doesn’t stop Liberals from being politically correct.  Hey, idiots!  When a disease comes from a certain location it's called where it's from.  It's always been the case throughout history!

Daily Mail reports President Donald Trump on Wednesday defended his use of the term 'China virus' to describe the coronavirus, saying 'it's not racist at all.'

The president, repeatedly this week, has talked about the 'China virus,' a moniker that has been called racist. China expelled journalists from three major American news outlet in the wake of Trump's words.

Trump, who started his Wednesday briefing by saying he had 'important developments in our war against the Chinese virus,' told reporters at the White House he used the description because the virus originated in Wuhan province of China.

'It's not racist at all. It comes from
China, that's why. It comes from China. I want to be accurate,' he said during a press briefing.