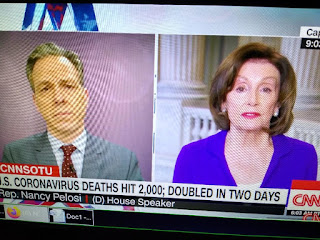 This comes from a woman who believes in open borders, lives in a sanctuary state, and can't seem to figure how to pick up the human feces on every street corner in her congressional district.
Nancy Pelosi is not in a position to criticize a bum walking down the street let alone President Trump!

Fox News reports House Speaker Nancy Pelosi, D-Calif., called out President Trump on Sunday over his handling of the coronavirus pandemic, saying that his denial of the seriousness of the pathogen and his delay in ramping up the federal government’s response to it has proved “deadly” for Americans.

“His denial at the beginning was deadly, his delaying of getting equipment ... to where it is needed is deadly, and now the best thing would be to do is to prevent more loss of life, rather than open things up so that, because we just don't know,” Pelosi said during an interview on CNN’s “State of the Union.”