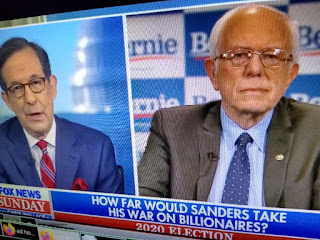 Let's get one thing straight.  Bernie Sanders hates the United States.  Even though he benefits by living here, he hates his own country nonetheless.

The only thing Bernie Sanders knows how to do is  ad hominem attacks on President Trump.  Sanders is also depending so much on the younger voter.  Trouble is that demographic historically is the least dependable  to get to the polls.

Here's what Bernie Sanders doesn't understand about wealth inequality.  Wealth is suppose to be unequal.  A doctor gets paid a lot more than a janitor and for good reason.  He has to go to school longer and get top grades.  A janitor doesn't have to finish high school.  But, in Cuba a place Bernie Sanders loves so much, doctors and janitors get paid the same.  This is what Bernie Sanders wants for the United States and its totally nu-American.

On wealth Bernie Sanders doesn't have a clue on what wealth is and how one gets there.  He hates the rich even though he's a millionaire.  What a phony!   A socialist country does not produce a Bill Gates, a Steven Jobs or any of a number of billionaires Sanders hates.  It's our capitalist system that produces those people.