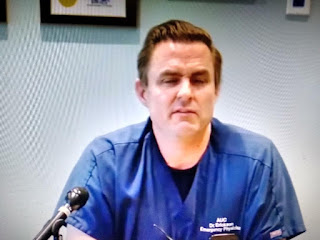 I've tried very hard on this blog to point out that Dr. Fauci's lockdown policy has been a huge mistake.
At every metric, it wasn't warranted for the amount of economic misery that has caused 29 million Americans to lose their jobs. Suicide rates are up, domestic violence have increased, criminals are being let go in the streets, this has become a mess! The Next News Networkhas done some of the best reporting on this issue.

The sad thing about all this is that Anthony Fauci won't pay a price for all this calamity. He should!  Trump got caught in the Covid-19 vortex and believed his so-called exports.  At least he knows how to rebuild our economy again.

YouTube has seen fit to pull down the more than an hour long presser by the California Doctors.  YouTube doesn't' believe in a free exchange of ideas especially when it runs counter to Leftism.

This is an attack against every Americans constitutional rights, but YouTube disregards any of that.

You can still find the original video by doing a search on YouTube.  It may take a little doing, but it's worth it.
Dr. Fauci, as Sen. Rand Paul pointed out, isn't the end all of opinions.  He's been right, to my estimate, 40% of the time.  Yet, he's a rock star to the MSN and Democrats.  With a record like that, I don't see why!