Lawmakers plan meeting to strip some powers from Whitmer, as protesters gather outside home 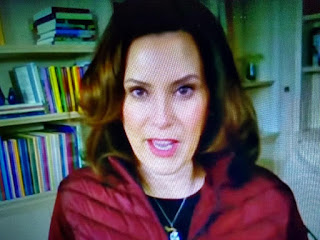 I think there's a pretty good chance this woman is not gonna get reelected.

Fox News reports protesters gathered outside the home of Michigan Gov. Gretchen Whitmer on Thursday -- the same day reports emerged that she plans to extend the state’s coronavirus stay-at-home order by two weeks until May 15.

“We wanted to send Gretchen Whitmer a message, we didn't want to surrender our liberties just for a little temporary safety,” Brian Pannebecker, who helped organize the protest, told the station.