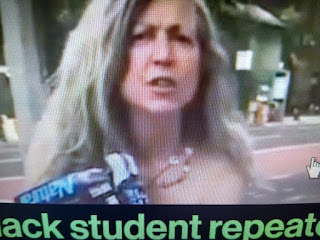 So this is what a Phd grad from Yale or Brown, the article mentions both, has nothing better to do than walk around New York City wearing a 'Black Lives Matters' T-shirt?
I guess the story suppose to suggest that there are racist walking among us.
So what?
Life is tough!  So what else is new young black Phd student?  Personally, I feel this woman is mentally deranged.  Nevertheless, does she represent all white people, or Manhattan, one of the most liberal sections of New York?  This is the tripe that passes for news coverage today.

NY Post reports a black student filmed a middle-aged white woman who launched into a vile racist tirade on a Manhattan street — repeatedly using the N-word and calling her an “ape.”
Yale PhD student Kathryn Graves was walking in Midtown in her Black Lives Matter T-shirt when the woman began shouting at her, prompting her to turn down the music in her headphones.
“Obama’s f—ing d–k right next to his ape f—ing wife,” the unidentified woman rants at Graves, according to the footage posted to Instagram Sunday.