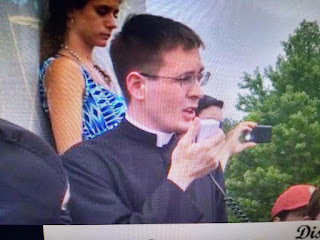 I give a lot of credit to this priest for talking to these woke idiots who haven’t the common sense God gives flees.
There's a reason why The Bible speaks very clearly about arguing with fools.  Seeing this video says it all.  These people are so stupid the colleges they graduated from need to be sued for malpractice.

Gateway Pundit reports earlier this week the Gateway Pundit announced a prayer rally on Saturday at the iconic St. Louis Statue on Art Hill in Forest Park.
We planned the rally because there is currently a petition by local leftist and radical Umar Lee to remove this beautiful landmark in St. Louis City.

There is also a movement to rename the city because St. Louis was “Islamophobic.”
And like clockwork local Islamist Umar Lee and the left smeared TGP and Christians who planned on attending the prayer rally as “white nationalists.”

On Friday, in the most egregious attack on this rally yet, St. Louis City Treasurer Tishaura Jones posted several tweets attacking Mayor Krewson and labeling local Christians “KKK” for holding a prayer rally to save the St. Louis statue in Forest Park.

In the video, you hear an individual make threats against the St Louis Cathedral: “Eventually, we’re taking that too, though.”#CatholicTwitter #Antifa https://t.co/PfspTwC8eC pic.twitter.com/y65S0GLqTw
— Bree A Dail (@breeadail) June 27, 2020