Back to being a Democrat: Atlanta Mayor Keisha Lance Bottoms criticizes governor calling in National Guard 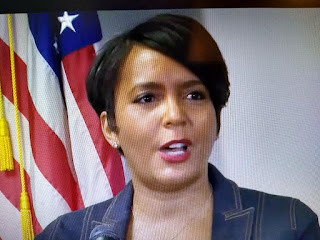 Apparently Keisha Lance Bottoms musta'got a memo from Nancy Pelosi or AOC telling her your not allowed to run your city with common sense.
Too bad!  Bottoms had shown she was a different kind of Democrat who cared about an 8 year old girl that got killed in her town.  Bottom said black on black crime is an issue that needed to be addressed.  But, as fast as she said that, the phone call from Pelosi got her straight again.  That's a shame!

Speaking on ABC's "Good Morning America," Bottoms acknowledged that the coronavirus pandemic and instances of police brutality had produced a "perfect storm of distress" in Atlanta and other parts of the U.S. in recent weeks. But she said the city and officials at Georgia State Patrol never felt the "need for the National Guard to come in" to address the situation.

"The irony of that is that I asked Governor Kemp to allow us to mandate masks in Atlanta and he said no," Bottoms said. "But he has called in the National Guard without asking if we needed the National Guard."