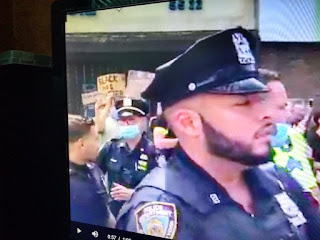 This is very telling to have Black Lived Maters protesters, and none of them were black.
Showing once again that BLM is a fake movement run by woke-idiot lesbians who are pushing a Marxist agenda that has nothing to do with black people.

NY Post reports it was a Blue Lives Brawl, as these dramatic photos show.
Tempers flared in Brooklyn Saturday as anti-cop protesters crashed a Blue Lives Matter rally — complete with furious finger-pointing and a lot of shouting, pushing and shoving.
Some three dozen anti-cop protesters showed up just before the 11 a.m. start of the rally at 13th Avenue and Bay Ridge Avenue in Dyker Heights.
They confronted a crowd of more than 300 police supporters, virtually all of them white.
Angry words flew, largely from the pro-cop contingent.
“You want to destroy America!” pro-cop protesters hollered. “You are f—ing Communists. Go to Venezuela.”

At one point, an angry, elderly pro-cop protester swung his fist at the other side. There were no arrests, however.