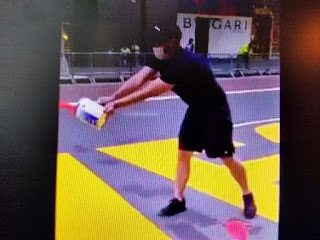 This man deserves to have a statue built for him right next to Christopher Columbus at Columbus Circle!
Gee, I don’t think it's vandalism to throw paint on a Black Lives Matter mural.  The mural doesn’t belong on a New York street in the first place.

NY Post reports this is the vandal who dumped red paint on a section of the Black Lives Matter mural in front of Trump Tower.
Witness Oscar Vela tweeted video Monday that shows the man stroll up to the mural with a can of red paint and dump it over the letter “V” in the word “Lives.”
As the man, wearing dark clothing, a black cap and a face mask, runs away, an onlooker can be heard saying, “What’s your name?” and “Run, bastard, run!”