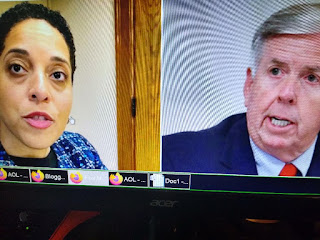 What's happening in St. Louis show what Democrat run cities are like.
It’s the same in Seattle, Portland, Chicago, Los Angeles, and New York.  Crime is skyrocketing and quality of life is in the toilet.

Fox News reports St. Louis' top prosecutor faced intense criticism on Monday-- including from the state's governor and attorney general-- after bringing felony charges against the homeowners seen in cellphone video brandishing guns when protesters appeared outside their home in a gated community.
Missouri Attorney General Eric Schmitt told "Fox News @ Night"  Monday that he is seeking to have the charges against the homeowners dismissed, calling it "a political prosecution."
St. Louis Circuit Attorney Kim Gardner, the city’s top prosecutor, said Mark and Patricia McCloskey -- both personal injury attorneys in their 60s -- will be charged with felony unlawful use of a weapon following the June 28 incident.

"It is illegal to wave weapons in a threatening manner -- that is unlawful in the city of St. Louis," Gardner said in a statement.