Ex-FBI boss Comey: 'I can't imagine that I'm a target' of Durham’s probe of Russia investigation” 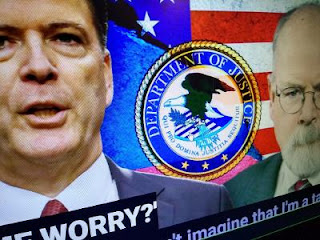 If there's justice in this country, James Comey and a host of others need to be indicted and face justice for spying on Donald Trump.


Fox News reports former FBI Director James Comey spoke dismissively of Connecticut U.S. Attorney John Durham's investigation of the origins of the bureau's Russia probe Sunday, saying he has not been contacted for it and that it is being used as a political tool for President Trump and his supporters.
In an interview that aired Sunday on CBS' "Face the Nation," Comey insisted that everyone involved in the investigation was "trying to do the right thing" and therefore Durham's probe was not concerning for him.

"I have had no contact with him and haven’t talked to him," Comey said about Durham, adding, “I can’t imagine that I’m a target.”