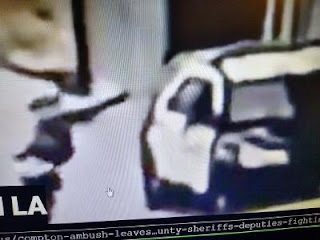 For the ignorant, attacks against the police equals 100,000 more votes for Donald Trump.

Just so you know! I pray for the officers!


Fox Newsreports a manhunt was underway in California early Sunday after two Los Angeles County sheriff’s deputies were shot in their patrol car Saturday by a suspect who “opened fire without warning or provocation,” authorities said.

The deputies, a 24-year-old man and a 31-year-old woman, were both in critical condition and “fighting for their lives” as they underwent surgery following the attack, which occurred around 7 p.m. local time outside a Metro rail station in Compton, according to the Los Angeles County Sheriff’s Department.