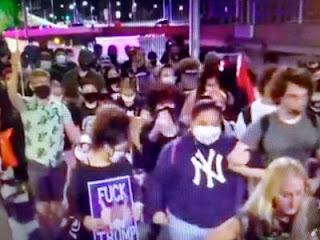 Most of these kids have no clue that BLM is a Marxist outfit run by degenerate Lesbians.

NY Postreports six Black Lives Matter protesters were arrested outside of the 34th Precinct in Washington Heights on Saturday night after earlier marching onto the George Washington Bridge and briefly stalling traffic.

Around 100 protesters took part in the rowdy, two-borough rally, first marching from The Bronx into Manhattan on the Cross Bronx Expressway.

They continued onto the upper level of the George Washington Bridge at around 7:30 p.m., snarling traffic for some 20 minutes before being dispersed by cops.