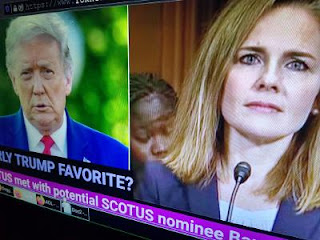 Barrett is the clear frontrunner.

Although I have a soft spot for Barbara Logoa from Florida, either choice is tremendous for the future of SCOTUS.

The news supported widespread speculation that emerged after Ginsburg's death. Although Trump recently released a lengthy list of potential nominees, he appeared to narrow those down over the weekend when he said he wanted a woman to fill the spot.