Preparing for Trump Ass kicking: Speaker Pelosi doubles down on saying Biden should not debate Trump 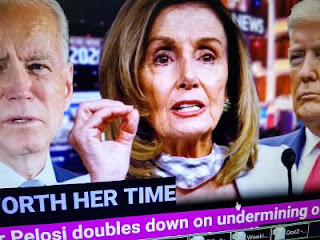 The real reason why Pelosi doesn't want Biden to debate Trump is plain to see.

He's got dementia!  Everybody knows it , including the media.  This race is not close.  The number of undecided can fit in her hairnet.

Fox News reports House Speaker Nancy Pelosi on Friday doubled down on her argument that Democratic presidential nominee Joe Biden should not debate President Trump, claiming the Republican incumbent and his "henchmen" have no "fidelity" to facts or the truth.

Asked during an interview on "Morning on CBS" whether she still believed the former vice president should skip the three scheduled debates, Pelosi said: "Oh, I do. Not that I don't think he'll be excellent. I just think that the president has no fidelity to fact or truth and, actually in his comments the last few days, no fidelity to the Constitution of the United States."