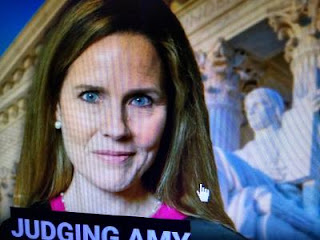 If Amy is the new female Scalia, I'm all for it!

Fox News reports President Trump plans to announce that Amy Coney Barrett will be his nominee to the Supreme Court to fill the seat vacated by the death of Justice Ruth Bader Ginsburg, multiple sources told Fox News on Friday.

The president is expected to make the announcement during a White House event on Saturday. Barrett currently serves as a judge on the 7th Circuit Court of Appeals.

Trump, who has a campaign rally scheduled later Friday night in Virginia, declined to say who he will announce when pressed by reporters at Joint Base Andrews. "You’ll find out tomorrow,” he said.