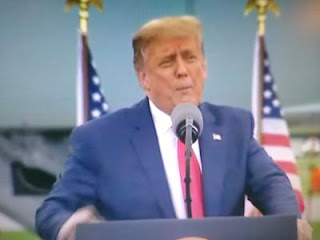 At every measure of an effective president, Trump beats out Biden by light-years!

“If Biden’s elected, China will own America. Washington vultures like Biden and others ripped apart entire towns all across your state,” Trump told a crowd of supporters at an overflowing airport hangar in Freeland, Michigan.

“Michigan lost half of all manufacturing jobs after the trade deals that Biden supported,” the president continued during a 90-minute address.