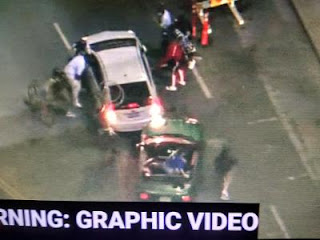 Like I said last week, the more protests around the country, that's 100,000 more votes for Donald Trump for a landslide victory.

Fox Newsreports at least one person was taken to a hospital Thursday night after multiple vehicles allegedly drove through a crowd of Breonna Taylor demonstrators in Los Angeles, according to reports.

Videos posted on social media showed a large group of people walking down Sunset Boulevard in Hollywood around 9 p.m., to protest the Kentucky grand jury's recent decision on the March shooting death of Taylor

Prius driver plows through crowd, gets run down by a pickup truck, gets car smashed up, crashes into another car, speeds away (📹 KCAL) pic.twitter.com/QVoK2l4kP9