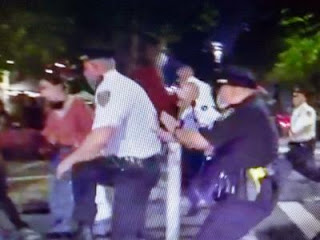 Gotta keep arresting these UNPEACEFUL protestors until they get the message.

But, thanks to our asshole Gov. Andrew Cuomo and his asinine no bail law, they get get released in hours.

NY Postreports dramatic video shows NYPD officers, some in riot gear, arrest a group of protesters in the midst of outdoor diners in the West Village on Saturday night.

The protesters — who were later hit with charges that include disorderly conduct — had been gathered on the sidewalk and a pedestrian island on Hudson Street near 10th Street.

Facing them across the street was a large group of bike cops, according to a video of the incident.

Suddenly, at around 9 p.m., officers race across the street, and shouting is heard.