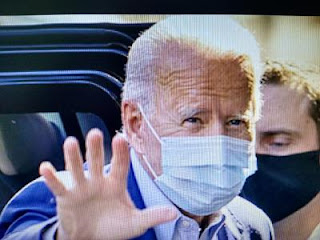 In a run for president each candidate states their position and the American people makes a judgment.

But, Joe Biden wants to be the first candidate for president who refuses to go on record with his positions.   This is unacceptable and unsustainable!  As far as I'm concerned, his candidacy ends right here!

Fox News reports Democratic nominee Joe Biden on Friday said that voters don’t deserve to know if he would attempt to pack the Supreme Court if he wins in November and Amy Coney Barrett is confirmed to the high court.

Biden was asked in Las Vegas, Nevada, about his position on packing the court with extra justices -- something that has seen support from a number of Democrats, particularly since President Trump announced his intention to confirm Barrett to the seat left vacant by the death of the late Justice Ruth Bader Ginsburg.