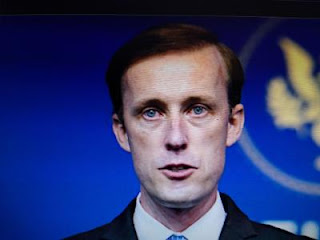 That's all everybody needs to know about Joe Biden's presidency before it begins.

American's ignorant has voted for the most corrupt politician this country has ever produced.  There was nothing true about the Steele dossier.  It was a lie told by Hillary Clinton to divert attention away from her hacked emails.

Many news outlets have declared Biden the president-elect. Newsmax has yet to project a winner, citing legal challenges in several key battleground states.

Jake Sullivan, who worked for Biden when he served as vice president in the Obama administration and as a senior foreign policy adviser to Hillary Clinton during her presidential race in 2016, made the comments on a podcast interview with David Axelrod, the chief strategist for Obama's presidential campaigns

"I mean, I believe that it is perfectly appropriate and responsible if we get wind, or if people associated with the campaign get wind, that there may be real questions about the connections between Donald Trump, his organization, his campaign and Russia that that be explored fully," he said at the time, The Daily Caller reported.