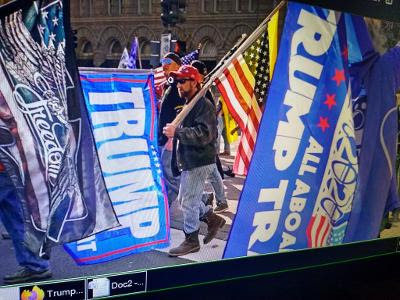 Nor do I see Antifa causing havoc and mayhem.  This is the difference between Patriots and the scummy Left.

Fox News reports Tens of thousands of President Trump supporters gathered Saturday in Washington, D.C. -- echoing claims of voter fraud and urging him not to concede to President-elect Joe Biden -- and were rewarded by an appearance from Trump himself.

The president and his motorcade drove past the supporters, some of them waving Trump flags and holding signs saying "Stop the Fraud" and "Best Prez Ever." The crowd chanted "Four More Years!" as Trump gave a thumbs up.

Trump hinted Friday on Twitter he may attend the rally, but his motorcade Saturday was headed to his Virginia golf course instead.