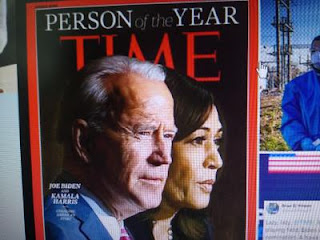 Who cares about Time Magazine anymore?

That rag has seen it's better days 25 years ago.

Daily Mail reports Joe Biden and Kamala Harris were named Time magazine's 2020 'Person of the Year' on Thursday for their election victory over Donald Trump.

The Democratic pair were chosen ahead of three other finalists: frontline health care workers and Anthony Fauci, the racial justice movement and President Trump.

Trump has not yet responded to the news that he lost out to Biden, but he is known to have an ongoing feud with the magazine over its failure to choose him in previous years. He was named Time Person of the year in 2016.