Mike Lindell at Rally: Fox News 'Had to Be in on It' 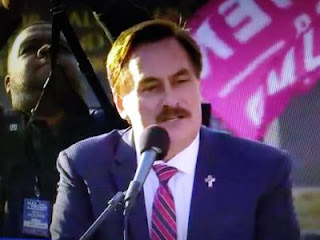 Fox News has definitely taken a big hit in credibility.

I don't think they'll be the number one place to get truth.  Although they still have Tucker, Sean, Laura and Steve Hilton keeping them afloat.

Newsmaxreports at the 'Stop the Steal' rally in Washington, D.C., on Saturday, MyPillow founder Mike Lindell fired criticism at Fox News, saying they were "in on" bending the election toward Joe Biden

"Why do you think Fox declared Arizona with only 14% of the vote in?" Lindell told the rally crowd. "They already knew what they did. They were in on it. I'm serious. They had to be in on it."

Lindell spoke for around 30 minutes, saying "this had to happen" so America could root out election fraud for future elections.

He added hope the nation comes back to "one nation under God," because people only turn to faith "when times are bleakest."

"We have decades of kids with no God," Lindell lamented.

He added the media was in a rush to serve Biden's campaign bid against President Donald Trump.

"Let's talk about Fox, but Fox would not let me advertise my book before the election because they said it was political," Lindell said, noting the only politics in it was his friendship with Trump.